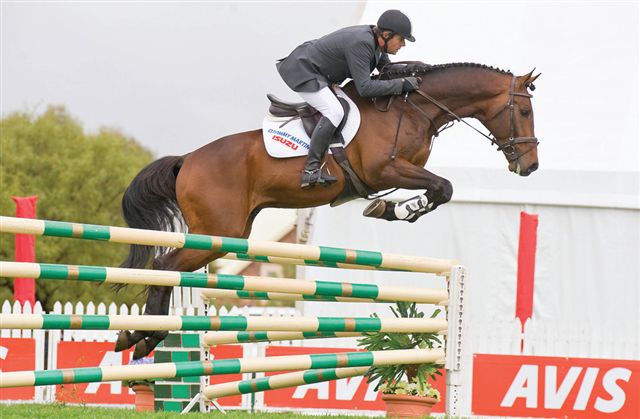 Colbert was imported from Germany and is licensed by the South African Warmblood Society.

The sire of Colbert, Colando I, was the German Showjumping Champion in 1984 with Karsten Huchk, and was later for many years successful in the International showjumping classes with Edgar-Henri Cupper from Belgium. Calando I returned to the Holstein breeding area. His son, Calei, won Team Bronze at the 2000 Olympic Games in Sydney with Andrè Johannpeter. Further top horses by Calando I are Careful (Evelyne Blaton), Cagliostrol (Niklas Arvidsson), Calaro (Andreas Ripke) and Coolman ridden by Pius Schwizer.

Calando I is the dam-sire of well-known stallions such as Carthago (Jos Lansink), Lord Calando, Lord Z both ridden by Michael Whitaker, Caturo (Bernado Alves) and many others. Lord (by the great Ladykiller xx) is a top international competition stallion and an even better sire, having sired more than 60 approved sons, such as Lord Calando, Landos, Lantaan, Locato, Lord Liberty, Lord Incipit, Lord Lennox, Lord Consul and Lord Z the list of great performers just goes on and on.
This pedigree is beautifully rounded off with the thoroughbred, Marlon xx, who was well and truly established as true performance transmitter.

Colbert has just started a very successful competitive showjumping career with Paul Hart and is currently jumping in the 1.35m classes. Colbert is a very impressive stallion, with beautiful paces and a superb competitive temperament. He is extremely athletic and elastic and he makes all the fences he jumps look very easy. Colbert, as his pedigree would suggest, has the making of a really fantastic competition stallion.